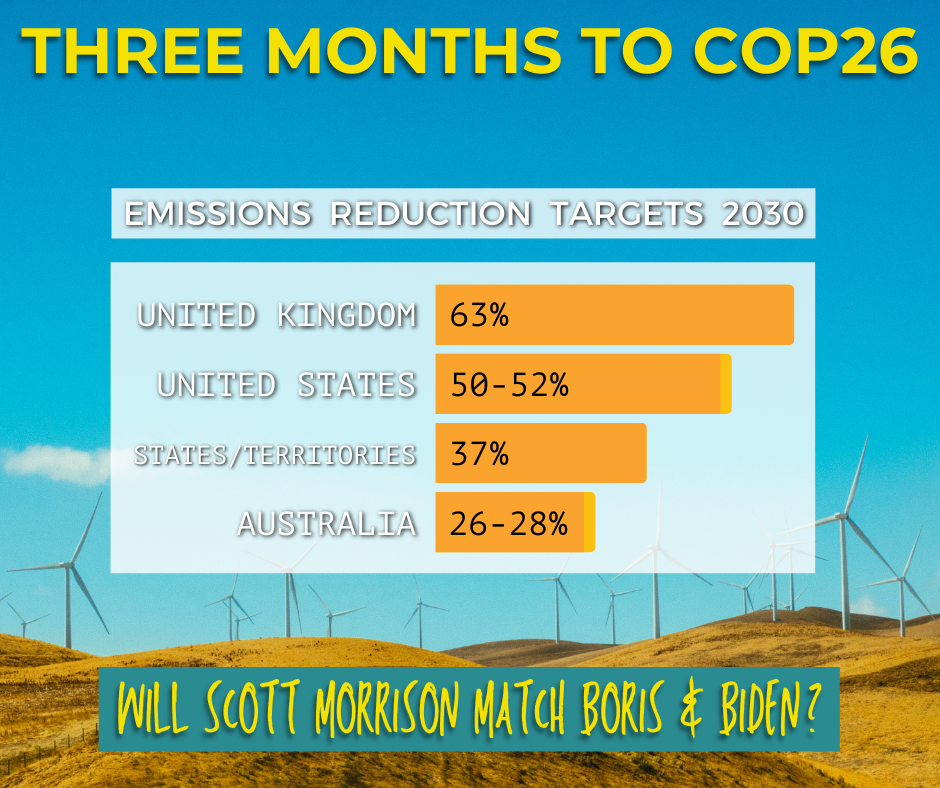 Friends of the Earth's Act on Climate collective has secured Victoria's climate targets...

Now we want to pressure the Morrison government to increase Australia's climate targets in time for the critically important COP26 summit in Glasgow.

Time is running out for Australia to lift its 2030 climate target.

The United States and United Kingdom will head to the COP26 climate summit in Glasgow this November with increased Emissions Reduction Targets for 2030. Will Australia?

Our country's target hasn't changed since 2015 when Tony Abbott was Prime Minister.

Will the Morrison government take a strong target to the summit or stick with the weak target set by Tony Abbott over half-a-decade ago?

We are facing a climate crisis. The polar ice caps are melting, the Great Barrier Reef is bleaching, and Australia is burning. Yet despite all the evidence, Prime Minister Scott Morrison and his government refuse to act.

Australia is becoming a laggard on the world stage with regards to climate action.

Communities across Australia are showing incredible leadership. People from all walks of life—school students, unionists, firefighters, and activists—are calling for urgent political action. There's a growing chorus calling for governments to rein in emissions, secure a just transition, and protect communities on the frontline of climate impacts. This is especially true in Melbourne's inner east.

Local Councils, State Governments and communities are taking action. It's time for elected representatives of the Federal government to join them.


WHAT'S NEEDED: AN INCREASE TO AUSTRALIA'S 2030 CLIMATE TARGET BY COP26

Emissions Reduction Targets that meet or beat what has already been pledged by the United States and United Kingdom.

A commitment to reduce Australia’s emissions by between 50-63 percent would build on the momentum of state and territory initiatives and signal to countries considering Carbon Border Adjustment Mechanisms that Australia is putting its shoulder to the wheel on climate. This outcome would be a welcome step towards aligning national climate policies with the latest science.